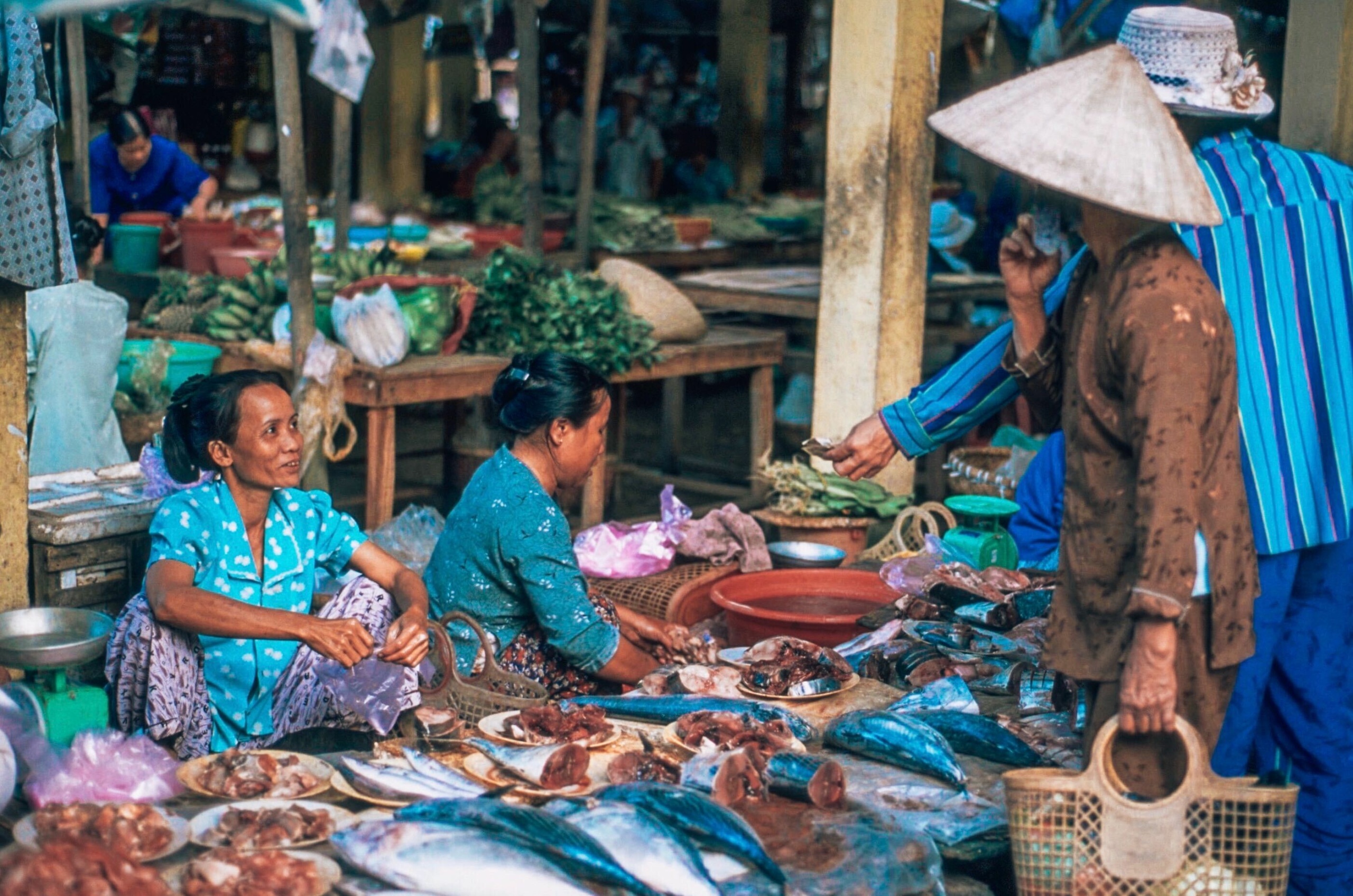 Meet Adam Rogers, a UN adviser for over a quarter of a century, an author, consultant, environmental journalist and an overall change maker who goes by the motto “the time is always right to do what’s right.” Having eaten his way through over 130 countries on all continents, Adam is also one of the most experienced food travelers out there. His recent books include The No Mammal Manifesto: Diet for a new and more sustainable world and The Intrepid Traveler: the ultimate guide to responsible, ecological, and personal-growth travel and tourism. Here’s what he has to say about today’s complicated food world – and world food!

“The No Mammal Manifesto” is such a great down to earth proposition that each one of us can start applying in our daily life. For those who haven’t read the book, can you tell us what inspired you to write it and give us a quick overview of your message?

If people had to pay the true cost of beef they would not eat it so often.

With your background working for the UN for over 20 years, inevitably, a big part of the book discusses how what we eat directly affects all 17 Sustainable Development Goals (SDGs). There is so much to it; I invite everyone to read the Manifesto and find out exactly how our steaks influence girls’ education or the health of our oceans. Realistically, how much faster could we reach the SDGs if we cut down on global meat consumption?

As you know, the Sustainable Development Goals are a universal call to action to end poverty, protect the planet and ensure that all people enjoy peace and prosperity by the year 2030. The straight answer to your question is we will not reach the SDGs by the year 2030 at current levels of global meat consumption – at least not mammal meat consumption. If we cut back to non-mammal meats like chicken, turkey and seafood we might make it, but otherwise not.

As you said in chapter 5, “Rethinking that ribeye may seem trivial, but believe me, it is not.” What would you say to those who don’t think our individual food choices matter and that change can only happen at policy level?

I would say that both are correct. Choosing a turkey burger – or better yet a plant-based burger instead of beef, makes an enormous contribution to solving everything from the climate crisis to the deepening poverty levels of indigenous peoples living in the Amazon. However, policies that allow for the beef industry to pollute our waterways and our arteries while externalizing so many of the true costs of production are a big part of the problem. If people had to pay the true cost of beef they would not eat it so often. What we need is enlightened policy that regulates red and processed meat consumption similar to the regulations for other carcinogens and foods with public health concerns.

Choosing a turkey burger – or better yet a plant-based burger instead of beef, makes an enormous contribution to solving everything from the climate crisis to the deepening poverty levels of indigenous peoples living in the Amazon.

One approach is to regulate the industry or to outlaw certain foods – as New York City has tried to do by banning sugar-sweetened drinks in cups larger than 16 ounces (0.5 liters). A more market-based approach would involve taxing red and processed meat according to their health impacts, and incorporating their true costs of production. Policies and government subsidies will need to be redirected away from harmful agricultural practices and toward ones that are healthier for our bodies and our environment and indeed our planet.

In the light of recent pandemic, do you see hope that we’ll finally realize how everything is interconnected? What are your thoughts on meat consumption post-covid?

I indeed see and have hope the COVID19 pandemic will wake humanity up to everything from social justice issues to the benefits of healthy eating. The pandemic has been like the tide going out, exposing deep cracks in the foundation of our societies. We have the opportunity now to fix these cracks while the tide is out. Otherwise, next time, it could be much worse.

Similarly, we can’t ignore the fact that the recent wave of anti-racism protests has a lot to do with food. An estimated 23 million people in the US, predominantly of color, live in ‘food deserts’. “Food insecurity can cause and/or exacerbate violence and civil unrest” you very aptly write in regard to SDG 16 Peace and Justice. What do you think we can do at both government and individual level to tackle this problem in the US? Are urban gardens a good start?

Absolutely, as I write in the book, there is a causal relationship between food on one side and peace and justice on the other. In the US, at the Government level, we need more enlightened policies that put healthy food back on the table, and not the food that well-endowed lobbyists like the American Farm Bureau Federation, the American Feed Industry Association, the American Meat Institute, the Animal Health Institute, the National Cattlemen’s Beef Association, the National Meat Association, the National Pork Producers Council, and others are telling us to eat. At the individual level, food security and “food justice” begins at home. Definitely growing as much food through personal or community gardening and being as independent as possible is a good start.

The pandemic has been like the tide going out, exposing deep cracks in the foundation of our societies.

You claim that cats and dogs in the US eat more mammal meat than pets and people in France and Germany combined. As a new dog mom, that statistic really hit home with me. I want to be part of the solution hence we’ve been seeking poultry and fish-based feed for our rescue pup. We’ve even explored plant based dog protein from sources such as koji. What’s your opinion on the growing trend – reinforced by Peta – of vegetarian (or even vegan) dogs?

For dogs, certainly vegetarian and vegan diets are possible, but from what I understand they need to be done very, very carefully so they get the right nutrients and amino acids. Cats, on the other hand are more carnivorous and don’t do well on vegan or vegetarian diets. That said, from my point-of-view, both do just fine on poultry and fish diets. Keep in mind that while cats are carnivores and dogs are omnivores, neither are cannibals – which is what you are forcing them to be by feeding them meat from fellow mammals.

In the US, at the Government level, we need more enlightened policies that put healthy food back on the table, and not the food that well-endowed lobbyists are telling us to eat.

While I’m largely vegan myself, I think any form of radicalism is a slippery slope. Industrially grown vegetables flown from across the world can sometimes be more harmful to both the planet and our health than locally sourced fish or dairy. Are you enthusiastic about the fast growing number of die-hard vegans or do you think we should rather aim to be more “flexitarian”?

I think it is always best to eat locally to avoid burning a lot of fossil fuel to transport your food around the world. This is especially true with meat. If you eat a hamburger in China that was made from a cow raised in Brazil, you will be making a massive contribution toward healing the planet by reconsidering your meal choice and going with local chicken or fish.

When it comes to food in travel, I don’t believe that you can fully appreciate local flavors when you’re strictly vegan, or even vegetarian. You say in your book “when you’re hungry and your host kills a goat in your honor, it would be poor manners to decline”. Can you tell us about some of the situations in your travels when keeping an open mind about food led to amazing encounters with local people?

What I meant when eating a goat killed by your host in your honor was that you should inform your hosts ahead of time of any dietary restrictions. This can actually open up conversations about why you may choose not to eat mammals or other animals, as people in most places take for granted what they eat, and just eat whatever their parents ate. Of course, they may just think you are crazy. If you do not tell them, and a goat is killed, it’s better to eat the goat. Aside from mammals, I always keep an open mind about food – and there are a lot of options when traveling. Removing mammals from the menu just takes a small slice of the menu away.

On the contrary, what’s been the easiest travel destination(s) to cut out meat altogether and still enjoy local cuisine to the full?

I would say that aside from the United States, India is probably the best country to travel in where you can enjoy local cuisine without eating animals. Thailand can be good if you communicate clearly that you don’t eat any animals. They may tell you something is vegetarian and still put small shrimps in your noodles.

You’ve been to over 130 countries. What have been the most surprising/underrated destinations in terms of local food?

Probably the most surprising and underrated country in terms of food is Ethiopia. That country has the most amazing landscape, culture, music, people, wine and food. The food is always served on a bed of injera, a giant spongy sourdough bread, and includes a vast array of options, ranging from multicolored mounds of spicy stews of chicken and fish to vegetable curries and dishes.

After seeing so much of the world, what’s still on your travel wish list?

Places are always changing, and some countries even change names, so every decade or so you can go out and experience the world all over again. That said, I plan to walk the Camino de Santiago, starting from Geneva, and also drive a motorcycle from Lisbon to Macao. I would love to do some trekking across Bhutan, and I still have not climbed Mt. Fuji.

Places are always changing, and some countries even change names, so every decade or so you can go out and experience the world all over again.

What’s the most bizarre thing you’ve ever eaten on your travels?

Probably the most bizarre thing I have eaten is the balut, in the Philippines. A balut is a fertilized duck egg where the duck is allowed to grow inside the egg for 14 to 21 days before it is boiled. When you crack open the egg you can see the little guy inside. Obviously, not a delicacy for vegans, but eating it does not violate the principles of The No Mammal Manifesto.

Get Adam’s latest book The No Mammal Manifesto here. 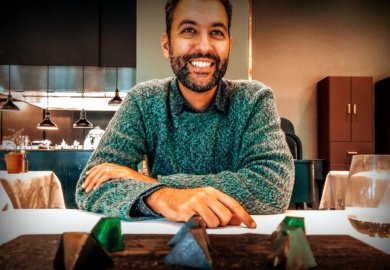 Go where the locals eat. Tony Aziz on building tolerance through food travel. 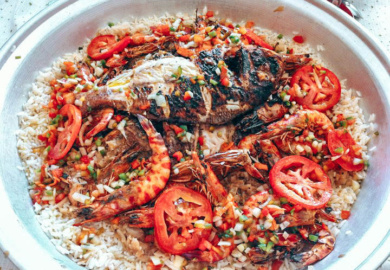 I Long to Return to China. In Food Travel Conversation with David Llada.