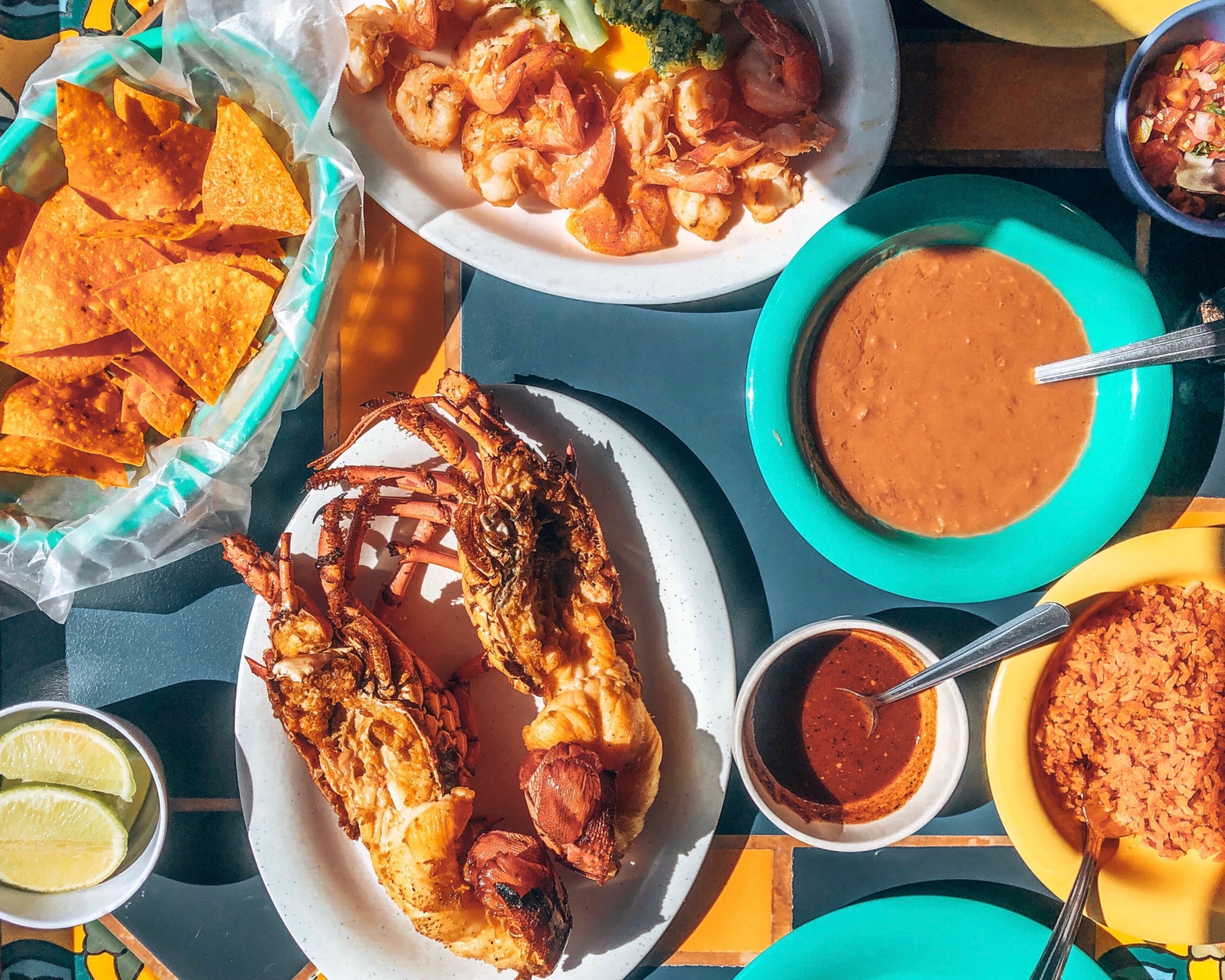 “I don’t even know what Puerto Nuevo-style is, but I want it,” said Anthony Bourdain moments before indulging in fried lobster served on a plastic plate on the beach, virtually straight out of the ocean.

Puerto Nuevo didn’t even need the publicity which came with that episode of No Reservations – lobster lovers had been flocking to this tiny fishing village in Baja California from all corners of Mexico and US long before it aired.

Set 20 minutes south of Rosarito Beach, Puerto Nuevo is not just any Mexican village. It’s the self-described “Lobster Capital of Mexico” where you can choose from over 30 restaurants serving up one and the same dish: pan-fried Baja lobsters, freshly caught in the nearby waters, served with comforting refried beans, rice, flour tortillas and a spicy red sauce, butter and limes on the side.

Lobster lovers had been flocking to this tiny fishing village in Baja California from all corners of Mexico and US.

“Puerto Nuevo-style” is now a world-famous synonym for the exquisite fried lobster offered in numerous restaurants but the village had very humble beginnings. It started off as a tiny fishermen’s settlement where they offered their daily catch literally from their kitchens. Many of the local fishermen were natives of Jalisco, a Mexican state farther south. They brought with them the tradition of inviting their clients into their living rooms for a home-cooked meal, which often included succulent Pacific lobster caught just off the coast.

The beloved Lobster Village, wrote Frank Messina 30 years ago, is a tale of growth of a ramshackle fishing village into a full-blown resort area. Let’s just call it a lobster’s tale.

The people of Puerto Nuevo were so poor back then they only ate what they were able to catch – i.e. lobster. Unsurprisingly, they soon became sick of it but quickly discovered visitors liked it, so they started to exchange lobster for other goods and money and the livelihood of the villagers slowly improved.

The official founding of Puerto Nuevo as we know it today was backed up in the mid 1950’s by the Plascencia and Ortega families who helped to introduce the succulent lobster dish that is now a true symbol and pride of the village to the outsiders.

“Puerto Nuevo-style” is now a world-famous synonym for the exquisite fried lobster but the village had very humble beginnings.

The village was officially incorporated in 1956 with the opening of its first lobster restaurant, Puerto Nuevo II, which is still one of the most popular venues in the area. Puerto Nuevo gained the most popularity in the 1970s and 80s and is now known as the “lobster village”. If someone’s been to Baja at least once in their life, they probably went to get the famous crustacean lunch there.

We don’t eat lobster often and save it for very special moments and locations where it’s truly celebrated. In fact, we can count the amount of times we ate lobster on one hand: Gloucester in Massachusetts (inspired by Anthony Bourdain), a fishing village in Italy, Boston (do lobster rolls count?), straight off the boat on the coast of Sri Lanka. And Puerto Nuevo.

“There is a voodoo to lobster economics.” wrote Ian Brown researching lobster industry just north of Maine. “What used to be poor man’s fare, the fallback meal of people too impoverished to afford anything else, is now a billion dollar business and a universal mark of luxury – with the result that a lobster that sells for $3.50 on the wharf can cost $60 and more on a restaurant plate in New York or Toronto or Shanghai, regardless of how many lobsters are pulled from the sea.”

While it doesn’t feel right to take part in the fancy surf-n-turf extravaganza and all you can eat Vegas-style seafood buffets, in a place like Puerto Nuevo you directly participate in supporting the sole pillar of local economy, ensure the fishermen can stay true to their roots instead of moving to urban areas in search of jobs, and literally help put food on their family tables. All for a fair price. Win win.

But with over 3 dozen restaurants spanning mere 4 blocks, each claiming the title of “best lobster in the village”, how do you know which one to choose?

One thing is certain – you have to do your research beforehand and make your way to your selected restaurant confidently or else you’ll fall prey to a very convincing promoter of another, potentially mediocre venue and/or one of the many souvenir vendors. The village is very touristy as that’s their main source of income, so just be prepared to respectfully decline the myriad of trinkets and menus offered to you. A polite “no gracias” will do just fine.

In Puerto Nuevo you directly support the sole pillar of local economy, ensure the fishermen can stay true to their roots instead of moving to urban areas in search of jobs, and literally help put food on their family tables. All for a fair price.

The ambiance and décor throughout most of the restaurants is cheerful rustic Mexican, the side dishes are consistent and the pricing comparable, hence the choice is really tough. Obviously a clear advantage is ocean view. The restaurants that boast the best ocean-view tables are Villa Ortega, La Casa de Pescador, Angel del Mar and the somewhat underrated Siete Mares. Slightly away from the crashing waves you’ll find Sandra’s, La Casa De La Langosta, and the historic Puerto Nuevo II.

Here is a list of all Puerto Nuevo restaurants. (Yes, the village has their own website puertonuevolobster.com).

One good indication of quality is whether the tortillas are hand made in-house. Such is the case at Villa Ortega, an established restaurant set dramatically right above the ocean. This restaurant has been family-owned for five generations. Second recommendation is perhaps the least touristy venue in the village – Don Luis. It may not be tethering on a cliff but still offers some ocean views, a very cozy vibe, only local patrons and prices to match.

Sandra’s is another hidden gem – the owners Sandra and Lucho are children of the village founders and have been serving lobster since 1983. Another specialty of the house are crab legs, snails and callo de hacha (scallops). Lastly, we enjoyed our langosta spread at La Casa Del Pescador and only have good things to say about the quality of the food, service, price and the view.

As you can see, the choice is very hard indeed.

Lobsters in Baja also come in various sizes, however the best, most tender are the medium ones weighing around 1 pound. Even the restaurant owners will tell you that the XL lobsters are tougher and not as succulent. Prices for a lobster dinner with all the trimmings will range from $15 to $30 depending on the size of the lobster you decide to get.

The lobsters caught here in Baja Norte are called spiny lobsters, also known as langostas or rock lobsters. Compared to their distant relatives from Maine, spiny lobsters have much larger antennae and do not have claws. Unlike Maine Lobster, where there is a lot of messy cracking involved, the ones here come out already conveniently split and ready to dig into.

The best time to come is late weekend lunch when local families gather to enjoy a festive meal together and mariachi bands liven up the otherwise quiet village.

Tip: According to tradition, the lobsters are pan-fried in lard, so the meat stays soft and tender, and makes it extra flavorful while crunchy on the outside. However, you can ask to have yours cooked in vegetable oil, and in fact many restaurants do that by default today as it’s simply cheaper. But if you want to be sure to avoid lard, always double check.

Most of the eateries in Puerto Nuevo open around 10am and close around 8pm but by far the best time to come is late weekend lunch (2-5pm) when local families gather to enjoy a festive meal together and mariachi bands liven up the otherwise quiet village. And of course you need day light to appreciate the ocean side location.

Cash is king in Puerto Nuevo, however there are a few establishments that will accept credit cards.

Please also note that lobster season in Baja runs from October through March. If you visit at other times of the year your lobster may be imported, cooked from frozen, or worse still – illegal catch.

If you’re LA based, head to Long Beach where Chef Thomas Ortega and his Alta/Baja California cuisine restaurant Playa Amor will reignite your love affair with Puerto Nuevo’s lobster. This critically acclaimed chef offers a sophisticated, playa-inspired menu of contemporary pocho and modern-Mexican cuisine. You’ll find an approachable yet gourmet experience that reflects the multicultural, Mexican-American heritage of Southern California yet is respectful of south of the border Puerto Nuevo tradition. Buen provecho! 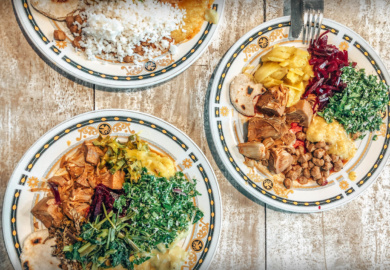 Where to Eat in Mirissa, Sri Lanka 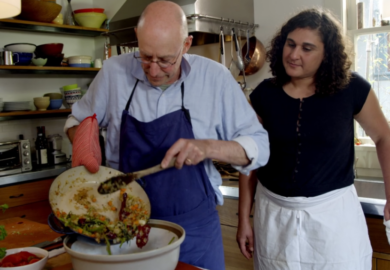